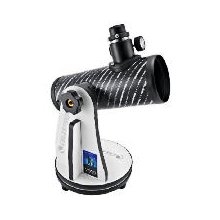 Recently I was searching for a smallish portable telescope that I could set up quite quickly and at a reasonable price.

A friend of mine recommended the Celestron Firstscope, so I decided to go ahead and purchase it.

I was a little skeptical but as as it only cost $50 I thought I couldn't go wrong. However any doubts I had soon went away a soon as I unpacked it.

It included two really good eyepieces which by themselves cost in the region of $40. It was an easy task to assemble as it was completely ready to use out of the box.

For the price, the base was well made like a dobsonian. It had a smooth swiveling motion so that and can easily point to celestial objects and tracking it by gently pushing the tube.

I was very impressed with the images of Jupiter and its moons, Saturn, craters on the moon and on a clear night the Orion nebula.

At the price I think anyone would be hard pushed to find a better starter scope. I have no hesitancy in recommending this to anyone who has an interest in astronomy.

Join in and write your own page! It's easy to do. How? Simply click here to return to Celestron Telescope Reviews.